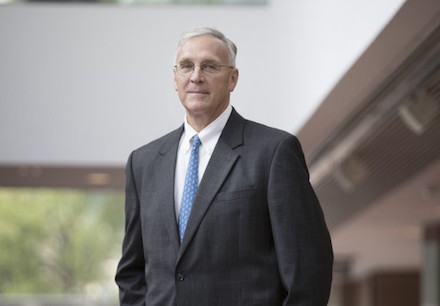 When the Space Shuttle Challenger exploded in the clear blue skies over Florida that January day in 1986, Mike Cassidy was in a plumbing supply shop on Bishop Street.

He had planned to spend the morning fixing a faucet. Instead, he spent it like many Americans, in front of the television, transfixed.

But it wasn’t so much the billowing clouds of smoke, the falling debris, or the obsessive search for just what had gone technically wrong that captured Cassidy’s attention. Instead, he couldn’t stop pondering the longer-term policy failures that he felt must have contributed to the disaster.

“The engineers knew they had a problem. They didn’t want to launch. They got overruled,” Cassidy said.

Months of reading and studying in the aftermath of the disaster eventually led Cassidy to the Georgia Institute of Technology, where he earned a master’s degree in Technology and Science Policy in 1988.

That decision, in turn, pointed the onetime IBM employee and tire salesman toward a long and influential career promoting university research and economic development in Georgia, first at Georgia Tech’s Advanced Technology Development Center (ATDC) and later the Georgia Research Alliance, or GRA.

Now, after three decades, Cassidy is preparing to step down from his role as president and CEO of the GRA — a public-private partnership that works to expand research capacity at state universities and that funds startup companies around technologies invented at places like Georgia Tech.

“It’s a good time to have new leadership come in and bring some new ideas to the overall strategy,” Cassidy said. “We’ll also have a new governor next year, so it’s important that we look at building new relationships there.”

But he plans to remain active in technology development and policy. Among other things, he hopes to help boost Georgia Tech’s School of Public Policy to new heights as a member of its advisory board. The School is part of Georgia Tech’s Ivan Allen College of Liberal Arts.

He has been able to bring people with different agendas together to collaborate both across sectors and across university campuses, where that was not a normal course before.

Cutting His Teeth at IBM

Cassidy grew up in Philadelphia and moved to the Atlanta area when he was in high school. After college, he went to work for IBM in a management track job that included servicing computers and, eventually, in the early 1980s, helping banks troubleshoot problems with the automated teller machines then cropping up across the country.

It was there that he got his first taste of how technology could go terribly awry without proper management.

One bank’s ATMs were shutting down when they detected a problem, but they were not routing that information back to the home office. It turned out that the company had installed a device on the network that was sucking up information, but not relaying it back to the central computer.

“That was the first time I realized that all this sophisticated technology can go really wrong unless you’re thinking about all the other things that can happen in a complex network,” he said.

In 1983, looking for a change, he decided to come back to Atlanta to work in his father’s tire business, but found the work wasn’t quite right for him. It was about this time that the Challenger disaster happened, and Cassidy’s path became clear. He wanted to go back to school.

25 – How long Cassidy has been at the Georgia Research Alliance

45 – Size, in millions of dollars, of the venture fund Cassidy co-founded to invest in Georgia-based startups

“I didn’t see myself in an MBA program, and poking around found that Georgia Tech offered a program called Technology and Science Policy (TASP) in the Department of Social Sciences,” he said. TASP was a forerunner of the Georgia Tech degree programs that use engineering, science, computing, and technology as a lens on public policy, international affairs, economics, the humanities, business, and other disciplines.

After visiting with professors, Cassicy was sold and enrolled in the master’s degree program.

While in the graduate program, Cassidy landed an internship at the ATDC, writing position papers and conducting research on state strategies to support innovation and entrepreneurship. This led to a full-time policy job after he finished his master’s degree in 1988. He rose to general manager by 1992, and a year later made the jump to the GRA.

Cassidy has been at the helm for many of the GRA’s greatest successes.

Since 2010, the GRA’s venture development program has helped 300 university-born technologies reach market, with 180 university-based companies now in the program’s portfolio, according to the GRA. They generate more than $660 million in revenue and account for more than 1,300 jobs.

Under his leadership, the GRA has also helped recruit more than 60 GRA Eminent Scholars to Georgia’s research universities, along with nearly $530 million a year in private and federal research grants, according to the Alliance.

“It’s a $45 million fund, which is significant for Georgia,” he said. “The fund has made 16 investments. About half of those companies are growing right now, most of them from Georgia Tech.”

Amy Todd, who has worked with Cassidy since he arrived at the GRA, said his ability to build bridges joining the academic, government, and business communities has been vital to his success.

“He has been able to bring people with different agendas together to collaborate both across sectors and across university campuses, where that was not a normal course before,” she said.

David Ratcliffe, a GRA board member who has worked with Cassidy for more than 15 years, agreed Cassidy’s presence will be missed.

“Mike has done a magnificent job,” he said.

“Mike has the Long View”

Cassidy hopes to continue to have a hand in the GRA’s mission after stepping down. Among other things, he is an ardent supporter of expanding the state’s biomedical enterprise development footprint — one of the few things he says he regrets leaving undone as his tenure winds down.

“Our universities in Georgia conduct about $1 billion in frontier biomedical research each year. But we don’t yet have the ecosystem necessary to convert that research into new enterprises that create jobs in Georgia,” he said. “We know more about what needs to be done and we are making incremental progress, but much work remains.”

He’s also hoping to help boost the School of Public Policy, which named him Outstanding Alumni for the year in 2017.

“Mike has the long view of what the school is and can be,” said Chair Kaye Husbands Fealing. “He brings that connection between technology, economic development, and public policy, which is where we operate.”

Among other things, Cassidy said he hopes he can help more of the school’s graduates find their way to influential staff jobs on Capitol Hill advising members of Congress about technology and science policy.

“It is very clear to me how ideas get advanced in Washington. It’s the staff, the smart young people coming from places like Georgia Tech, who understand where technology and science are taking us,” Cassidy said. “We need more of them up there.”