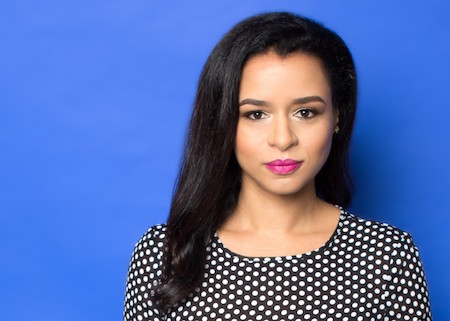 Then A Funny Thing Happened

How Sarah Cooper, MS DM 01, left a successful corporate career to take herself out of the comfort zone and into the scary world of comedy.

Sarah Cooper is uncomfortable now, in life and on stage. And that’s a good thing. It means she’s where she’s supposed to be. Instead of being comfortable in a cushy corporate job, she prefers putting herself out there to use her wit and creativity to entertain others and to make them think.

Despite her nerves, you won’t notice them as Cooper steps in front of an audience and starts shooting verbal spitballs that contain her biting observations of the tech world:

“I heard a rumor that the software engineers who work at Google are so proud of working there that they have sex with their badges on. That’s a joke. They do not have sex. My husband hates that joke. Because he’s a software engineer at Google.”

You also won’t see her anxiety in the writings and drawings she posts online or publishes in her humor books.

Still, that discomfort is there, lurking just under the surface. Will anyone come to this show? Is anyone going to laugh at that joke? Will anyone read my book?

This unease is a tool that propels Cooper away from what had been a very successful career, where she held user-experience design gigs with Yahoo! and Google. Meanwhile it draws her further along this new, still-unexplored path as a comedian, satirist, and writer.

“I was very comfortable at Google,” Cooper says. “Was I myself? No. But I was pleasing a lot of people and doing a good job.”

Of her current vocation, she says: “This. Is. Extremely. Uncomfortable.” Her words are drawn out to emphasize the point. “But at the same time, I’m just enticed by it.”

It’s weird being married to a software engineer. Anytime there’s an issue in the relationship, he makes me file a bug. I thought we weren’t spending enough time together so I filed a bug. He marked it working as intended.

Twists and Turns on the Practical Path

As a young girl, Cooper had always wanted to study theater. She even earned a theater scholarship to the University of Maryland. But her immigrant parents — she was born in Jamaica and came to the United States at the age of 3 — wanted her to pursue a more practical path.

So she switched to economics. It seemed businesslike, she thought at the time, without all the schmoozing.

Then came another twist. Late in her undergraduate pursuits, she took a design class and fell in love with Photoshop. After college, she took a job at a graphic design firm, hoping to turn her newfound love of design, color, and creating into a career. “I thought I could work my way up, and my bosses were like, ‘You don’t have a degree, so you’re not going to be able to do that,’” she says.

Flipping through one of the agency’s graphic design magazines one day, she saw an ad for the digital media program in Georgia Tech’s School of Literature, Media and Communication.Suddenly, she found a practical path she could be passionate about.

Cooper applied to become a graduate student at Georgia Tech, but she didn’t bother waiting to find out if she would get in. She came down anyway, in the yellow-pollen Atlanta spring, to meet with the professors she was sure would be teaching her. Nor did she have the internship she wanted at internet company MindSpring.

“I was very hungry and confident when I first arrived — I have always been like that with school, though,” Cooper says. “I felt challenged by the classes and immediately had so many ideas about what I wanted to do. The theoretical side of things made me want to write a screenplay about the imperative of technology, and the hands-on practical side made me want to design interfaces, which ultimately won over because I loved design so much.”

At the same time, she was endearing herself to fellow students and faculty alike.

“It’s particularly striking that she has made a career talking about how to be a lazy employee when in fact she is one of the most focused and productive people I’ve ever worked with,” Murray says.

Success in the High-Tech World

After earning her master’s degree in digital media, Cooper went on to successful work in design and technology, rising to creative director of an Atlanta design firm, then onto a job with Yahoo! in San Francisco.

Still, that impractical, artistic world kept tugging at her. So she left Yahoo! to try her hand at acting again, fulfilling that childhood dream. She got signed by an agency, had a small part here and there. Then a funny thing happened.

That little girl who always wanted to be an actor? Turns out she didn’t like being in front of the camera.

Cooper found herself in another of life’s seeming dead-ends, and broke to boot. She had to sell her car back home in Atlanta to pay rent in New York, where she had been studying acting. Something had to change.

Fortunately, her Georgia Tech connections paid off. Stevens, a digital media classmate, referred her for a job at Google. After surviving the infamously exhaustive interviews at the tech giant, she got hired on as a user-experience designer for the Google Docs team. She eventually became a manager there, too.

Cooper had found validation in her tech jobs and the praise of others — she’d always been a people pleaser, as she says.

But it wasn’t really her, not the real Sarah Cooper, not all of her at least, sitting in those offices, “crushing” those projects, as she’d later satirize the tech “bros” for saying.

Something about it all seemed so absurd. And that would prove to be her ticket.

How A Venn Diagram Can Change Your Life

Years before she took the job at Google, Cooper was in a meeting at Yahoo! when a co-worker stood up and scrawled something on the whiteboard. It was a Venn diagram, one of those charts showing a couple of intersecting circles with something important living in the space where the two circles overlap.

“It had nothing to do with what we were taking about,” she says. “And everybody just thought it was amazing. I was blown away, so I wrote it down in my notebook: ‘How to look smart in a meeting: Draw a Venn diagram.’”

Cooper didn’t know it at the time, but she had finally found her niche.
She put that notebook away in a box, moved it from city to city, place to place, job to job. It wasn’t until she started working at Google, and subsequently moved in with the Google engineer she would later marry, that she came across her doodle.

Flipping through that notebook, she came across the page with that “tip to look smart.” A light bulb went off. She could do something with this.

She’d seen so many silly moments in meetings. The coworker slowly repeating what the engineer said in a bid to steal some of the smartest guy’s smarts. The contemplative nodding. The empty but ubiquitous question, “Will this scale?”

She turned her sly observations into a viral social media post on the web publishing platform Medium, “10 Tricks to Appear Smart in Meetings.”

By this point, in 2014, she had already tried her hand at standup, and found she liked it — being in front of a live audience felt better than being on camera. But it was that first post that showed her a path to success outside technology. Within a day, the post had a few hundred thousand hits. Within a week, it was up to a million views.

A Calling in Comedy

Cooper had finally found her calling: not in acting, not in graphic design, not in digital media, but in comedy. Still, it took months for her to work up the nerve to tell her boss at Google that she was quitting.

“Everybody was just like, ‘Wait a second. You’re going to leave Google to do what?’ You feel like a crazy person,” she says.

Cooper found herself in an entirely new world to navigate, and she had to make her own map to find the way out.

“It’s a whole different world from tech,” Cooper says. “How do I get a literary agent? How do I get a publisher? Do I self-publish? Scheduling. Sometimes just getting up in the morning. Sometimes you don’t get out of bed and no one’s going to tell you not to.”

Her viral post eventually led to a book deal (100 Tricks to Appear Smart in Meetings and a humorous adult coloring book Draw What Success Looks Like), stand-up gigs, conference invitations and a successful website, The Cooper Review (thecooperreview.com), among other projects.

She still feels a little panicked before every performance. Ugly tweets and book reviews can be jarring. But she sees inspiration in that: If I can push through that negativity, maybe I can inspire others to keep going as well.

As she was getting started in comedy, Cooper heavily mined her experiences working in the tech industry for material. Today, three years later, she finds her comedy and writing are beginning to morph into new areas as she puts that former work life behind her.

Her next book, How to Be Successful Without Hurting Men’s Feelings, still counts as humor, still is workplace-based, but there’s a serious message behind it, too. It parodies “the oftentimes overwhelming and contradictory advice women get about how they should behave in the office,” Cooper says.

“It’s really about how ambitious women should forget these rules and stop tiptoeing around other people so they can show up in whatever way works for them,” she says.

For Cooper, that means being out there, staying uncomfortable and following her conviction that following your heart is the best path to fulfillment. And she has advice for those still trying to figure out what path they want to take, or how to find a new one.

“You know, I always go back to that notebook,” she says. “There was nothing telling me to write that, it’s just something that came naturally. So I feel like there’s a lot to be said for paying attention to what you’re doodling in the margins and to what you’re currently doing when you should be pursuing something else. My advice would be to just watch where your mind gravitates towards, because the things that come naturally for you are going to be the things that you are going to have the most fun doing.”

Find out more about Georgia Tech alumna Sarah Cooper, read her humor blog and buy her books at thecooperreview.com and sarahcpr.com.