Ilya Kaminsky is One of the World's Top Poets, and He Teaches at Georgia Tech 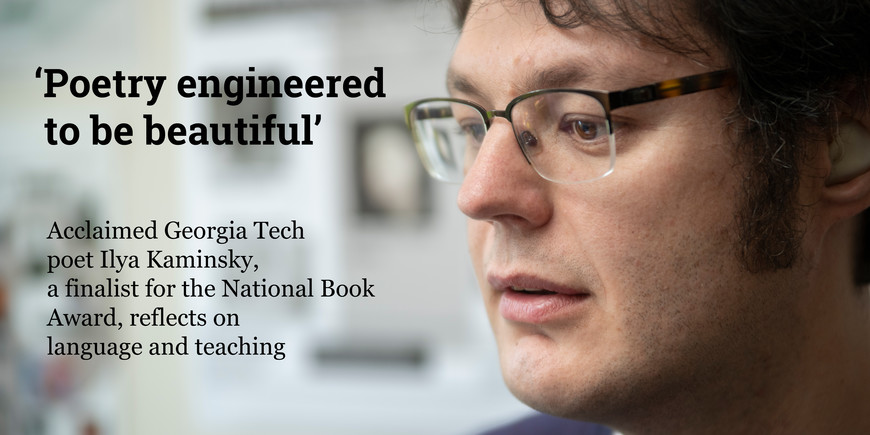 For now, however, the second-year astrophysics student from Meerut, India, is happy to be at the Georgia Institute of Technology. Yes, for the highly rated School of Aerospace Engineering. But also for Ilya Kaminsky, professor of poetry.

“There was something warm and inviting about his presence, something in his demeanor, that instantly drew me to him, “Tomar said. “As I went and introduced myself, I was greeted with such welcome and exuberance of spirit that made me feel that there was never a time when we hadn't known each other.”

Of course, a warm and welcoming presence is not all Kaminsky is known for. The Margaret T. and Henry C. Bourne, Jr. Chair in Poetry at Georgia Tech, Kaminsky is widely acclaimed by critics as one of the greatest poets of his generation. His book, Deaf Republic, is a finalist for the 2019 National Book Award in Poetry—one of the most prestigious prizes in American literature.

“When I was chairing the search committee for the Bourne Chair, I made the comment that I think Ilya will be a contender for the Nobel Prize in Literature in the coming years,” said Karen Head, a colleague of Kaminsky’s in the School of Literature, Media, and Communications, and a celebrated poet in her own right. “I don’t say things like this lightly; his work really is that special.”

Language in a Time of Crisis

The book opens to a crowd gathered in the town square of an occupied country to watch a performance. Suddenly, soldiers fatally shoot a young deaf boy. In response, the city’s population chooses to no longer hear the soldiers’ orders.

“They use deafness as a protest,” said Kaminsky, who himself has a hearing impairment and drew on his experience as a youth when writing the book.

Deaf Republic, Kaminsky says, is a “fairy tale,” but also a book about language in a time of crisis. It is also an intensely political book that calls into question any indifference to oppression or violence, at home or abroad.

“It talks about our privileges and questions them,” he said.

Kaminsky’s work has long included a focus on probing crisis and easing those affected by it, including work on behalf of immigrant, refugees, and the homeless. He has continued his work aiding marginalized communities while at Georgia Tech, including a workshop this month to mentor poetry critics from underrepresented communities and a recent reading organized by Poetry@Tech featuring immigrant poets.

‘Poetry Engineered to be Beautiful’

“For us, his special focus on social justice, diversity, and inclusion fulfills our strategic plan's strong desire to create with purpose, to make texts and things that have social meaning beyond their immediate academic utility,” said LMC Chair Richard Utz. “Ilya's poetry is 'engineered' to be beautiful and socially relevant and life-changing, and supportive of those often underrepresented in an atmosphere in which rigorous research is the most important currency.

Additionally, the attention surrounding Deaf Republic, as well as Kaminsky’s many international accolades since arriving on campus in 2018, are helping shine new light on the already well-regarded programs in the humanities offered by the Ivan Allen College of Liberal Arts, Utz said.

“Having Ilya on our faculty helps highlight to the world how Georgia Tech is just as competitive, just as rigorous, just as celebrated, in the humanities as we are in some of the key research areas more typically associated with the Institute,” Utz said.

One of Kaminsky's roles at Georgia Tech is director of Poetry@Tech, which engages Georgia Tech students and the public with poetry and presents the South’s premier poetry reading series.

Since its founding in 2000, the program has brought more than 250 poets to the Georgia Tech campus. All told, at least 19,000 students, aspiring writers, and members of the community have benefited from poetry readings and poetry workshops in Atlanta and around the country since the organization’s founding, according to Travis Denton, Poetry@Tech’s associate director.

“Early on, everyone thought that having poetry at Tech was an oxymoron, Denton said. “Then word got out what we were doing, and it didn’t stop. It took a few years, but now the idea that there's a nationally known poetry program at Georgia Tech feels very natural to everyone.”

Kaminsky said he appreciates being a part of the Ivan Allen College of Liberal Arts, which has an international reputation for bridging technology and the humanities and social sciences through innovative interdisciplinary research and teaching.

Most of Kaminsky’s students are studying engineering, and are lifelong makers drawn to poetry as intensive craft. Kaminsky said he draws enormous satisfaction from helping those students understand how that craft becomes art, and what that means.

“Sometime in the middle of the class, they realize that it’s not just about making, but about moving other people with what you make, about discovering something from what you have made, about being moved by your own language because something is revealed to you,” he said.

For a high-achieving student like Yashvardhan Tomar—who counts Leonardo da Vinci as his role model and has his sights set on an Ph.D. and a research career that he hopes someday leads him to Mars—mixing poetry and engineering makes perfect sense.

He said Kaminsky has helped him improve his own poetry immeasurably.

"Ilya’s teaching style is very participatory—every class is more of a conversation, a dialogue among students trying to grasp the intricacies of the craft with him throwing light on the right parts," he said. "He wants us to express how our five senses respond to the rhythm, the emotions, the images evoked by the poet. He wants us to think for ourselves what makes a poem work; what aspects inform the poet’s choices as they weave words in an attempt to move us in some way."

“Good poems, historically, are made; they don’t flow down the arm of the dreamy poet to the page,” he wrote. “Good poems are the result of planning, rigor, attention, intuition, trial and error, discipline, and the luck that sometimes comes when all of the above are applied. A flawless architectural design, an elegant chemical equation, a good poem is supposed to seem simple, spontaneous, fluid. To achieve his or her goals, that precision, that truth, the engineer, the chemist, the architect, the poet usually must work diligently, must sweat blood.”

'An Ongoing Relationship with Words’

For his part, Kaminsky is grateful for the support and kind words of his colleagues, fellow writers, and critics. But surrounded by a jumble of books and papers in the Poetry@Tech office on the first floor of the Skiles Classroom Building, he seems just as content to live his life steeped in words.

He calls it dwelling.

“It’s a wonderful thing to have this ongoing relationship with language, with words, with stories, with sounds,” he said. “Language is a beautiful entity to be a part of.”

He revels in the opportunity to share poetry with his students, and help them view the world, and their work, through the eyes and hearts of others. It’s a skill, he says, that can benefit anyone, no matter what work they do.

“Yes, it’s important to make a living, but once you make your living, you may ask what is the purpose of being alive,” he said. There are very few arts that advance that. Poetry is one of them.”