With ‘Sound Happening’ Making Music Is as Easy as Playing Ball 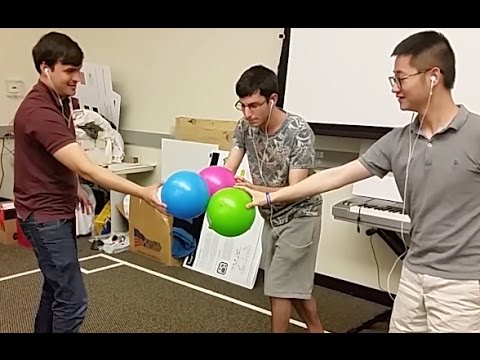 Technology has made it easier and easier to create music. With Sound Happening, a team of Georgia Tech students have further removed barriers to composition making it as easy as playing ball.

Sound Happening is a collaborative music-making installation that allows people to create music by playing with colorful bouncy balls. Using an overhead webcam and the Max/MSP programming environment, Sound Happening tracks the location of each person’s ball in order to manipulate and trigger various musical samples and synthesizers. The results are intriguing sound combinations that constantly change as participants play ball within the defined space. The project was a winner at the 2017 Clough Art Crawl at Georgia Tech.

Sound Happening was inspired by “the desire to open up the playful, delightful experience of music-making to people of all ages who may have never previously touched a musical instrument,” explained lead designer Dan Singer.

By using generic bouncy balls as a simple input for musical expression, the aim was to remove barriers to entry. Singer says the installation also draws from the performance art concept of a “happening,” in that the way the music evolves is participatory, improvisational, and unique to the people playing in the space at a given moment.

The installation space contains few visual cues so participants aren’t pressured to behave in a certain way. In turn, they often end up making music by playing catch, creating little games, and doing interpretive dances, among other things,” said Singer.

The Sound Happening design team began work on the installation during the Spring 2016 semester in Brian Magerko’s Adaptive Digital Media (ADAM) Lab Project Studio course, and has continued developing it as part of Magerko’s Spring 2017 Tech Arts Practicum course. Pedro Arevalo and Josh Moore have worked on the installation throughout its development alongside Dan Singer, the lead designer on the project. All are second year Master’s in Digital Media students. Donghai Liu, also a second year M.S. DM student, worked with the team during the Spring 2016 semester, while Agneya Kerure, a first year master's in Music Technology student, joined the team for the Spring 2017 term.

“It was really cool to have Sound Happening recognized as one of the winners of the Art Crawl, an event the does a great job showcasing the exciting creative work Georgia Tech students do,” said Singer. “We couldn’t have brought the installation to life inside Clough without the help of Art Crawl staff members who provided us with equipment and guidance.”

Presenting there gave the team an opportunity to user test the installation with a wide variety of Georgia Tech students.

“The most common question we received from Art Crawl participants was, “What sound am I?” People seemed to like to have a role in the musical ecosystem so they could explore and create with a purpose in mind.”

“We examined participants’ interactions with the bouncy balls, noting if they learned how to use them to manipulate the music with intentionality, and when they were inclined to leave the installation or to explore it more deeply. We switched up the sound samples and interaction mappings midway through the event to create A/B comparison tests.”

The exhibition provided the team with valuable feedback that will inform the future iterations of the project. 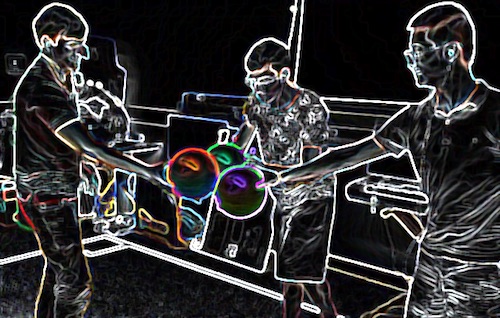 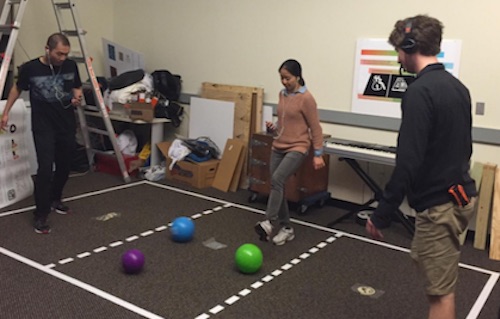 Sound Happening willbe on display at the Digital Media Demo Day on April 13, and will also be presented at the Tech Arts Practicum showcase at Eyedrum Art & Music Gallery in early May. The team is currently building a pipe and drape rig for Sound Happening so that they can present it in different locations and maintain consistent boundaries and lighting. They are hoping to get the project installed in at least one children’s science and technology museum as an interactive exhibit. They will spend the remainder of the spring semester polishing the sound design and creating a physical setup that will serve as a test prototype for how the installation could look and function in a museum setting.

In reflecting on the experience, Singer said, “As members of the Ivan Allen College of Liberal Arts at Georgia Tech, we’ve had opportunities to pursue creative projects that utilize emerging technologies in surprising and delightful ways. Sound Happening is no exception, and it ’s been a lot of fun developing the installation. Only in the Ivan Allen College could we spend our class periods making cool things with bouncy balls and music. Brian (Magerko) has high expectations for us and has pushed us to think critically about our design decisions, but the hard work we’ve put into Sound Happening has been very rewarding.”