Anna Westerstahl Stenport, chair and professor in the School of Modern Languages, led a discussion with artists on climate change during the event at the Kendeda Building for Innovative Sustainable Design. Stenport is also founding co-director of the Atlanta Global Studies Center, which helped organize the symposium.

The Sam Nunn School of International Affairs was a key contributor, as well. The school's Center for European and Transatlantic Studies generously contributed funding to the event, thanks to its Jean Monnet Center of Excellence Award. The school's Center for International Strategy, Technology, and Policy provided student support. Professor Alasdair Young also secured two of the speakers for the policy panel.

In her remarks, Stenport told attendees that "we know that the global south, the Arctic, indigenous peoples, and women all over the world are disproportionately affected by climate change. Art and artists have the opportunity to convey not only local stories, but also to speculate, imagine, and posit alternate and different futures for global good; those that are equitable and inclusive, and not driven primarily by capitalism and colonialism.”

The event brought together a wide range of experts to showcase climate change engagement by local student activists, scientists and engineers, business and policy experts, and artists. It was part of European Climate Diplomacy Week, an initiative of the European Union. In addition to the Nunn School and the School of Modern Languages, several other Georgia Institute of Technology units and the consulates general of eight European nations helped organize or participated in the event.

“This event encapsulates what I love best about Georgia Tech,” Young said. “You have collaboration across disciplines—atmospheric sciences, business, engineering, and international affairs—on a common topic, as well as cooperation with the local diplomatic corps and an engaged audience of students and people from the wider community.”

In addition to Stenport’s panel, the event featured remarks from President Ángel Cabrera, a discussion on science and engineering and a panel on business and policy.

Other Georgia Tech units involved were the Global Change Program, the Office of International Initiatives, the Center for Serve-Learn-Sustain, and the Ray C. Anderson Center for Sustainable Business.

To view a recording of the event, go to 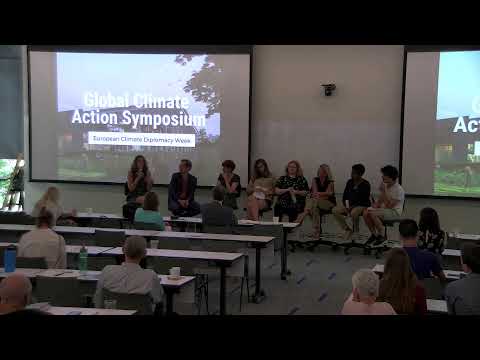