As the Braves and Atlanta United stadiums return to full capacity, what does it mean for the rest of the city?

Should Japan go forward with the Tokyo Olympics, even though only a small percentage of the country’s population is fully vaccinated?

Johnny Smith, the Julius C. "Bud" Shaw Professor of Sports History and associate professor in the School of History and Sociology, answers these questions and more in a quick Q&A exploring the past, present, and future of sports.

Smith’s most recent book, War Fever: Boston, Baseball, and America in the Shadow of the Great War, is about Boston, Babe Ruth, and the 1918 pandemic, and his book Blood Brothers: The Fatal Friendship Between Muhammad Ali and Malcolm X is being adapted into a TV mini-series on A&E.

Smith is also the author of A Season in the Sun: The Rise of Mickey Mantle and The Sons of Westwood: John Wooden, UCLA, and the Dynasty That Changed College Basketball. His work has appeared in the Wall Street Journal, Washington Post, Slate, The American Historian, and more.

This interview was recorded on Wednesday, June 16, 2021. Our conversation has been edited and condensed for clarity. 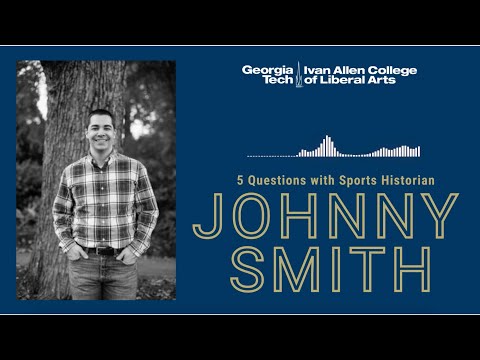 I know you've written books about Babe Ruth and baseball during the [1918] pandemic, the rise of Mickey Mantle, UCLA basketball, and the friendship between Muhammad Ali and Malcolm X. So, I was wondering, what's the common theme running through these stories that interested you or inspired you to tell them?

Johnny Smith: That's a great question. I think there is a pattern to all of those books and the book that I'm writing now about Michael Jordan. In each of those books, I was inspired by the story of an icon, a sports icon, who's emerging as a pivotal figure in the world of sports and American culture.

I wouldn't be interested in a great athlete, who was just a great athlete, you know? If they didn't have some kind of transcendental — if they didn't transcend the sport in some profound way, where I could examine the sport or the athlete’s relationship to society, or to culture, to politics, or some change beyond the field of play, I probably wouldn't write about them. But if I think that they can be used as a symbol to explain something larger, a larger story about America, a larger story about sports, then I think there's something to be told.

Your most recent book, War Fever, explores Boston, Babe Ruth and the [1918] pandemic. And I do think it's interesting that you started this before Covid, which is pretty crazy. Did you see parallels between how baseball and sports in general adapted and reacted to the pandemic in 1918 verse now? And then a follow-up, any parallels in the reopening in 19 — well, I guess it was in 1920, maybe, when the reopening would have happened — and now?

JS: Yeah, yeah, yeah. One thing we often think about with the 1920s, this period that comes after the war, after the pandemic of 1918 – 1919, is this idea of the roaring 20s. Right? It's sort of this stereotypical image of the decade.

And so, people had come to this conclusion that tomorrow wasn't promised to you. There was this urgency to find pleasure where you could, whether it was in a bottle, at a dance hall, or at a sporting event.

So I think that when we think about the pandemic of 1918, 1919, it shaped the culture to come. And we're seeing some of that now, already. There's an urgency in the United States to return to normality, right? You see major league baseball stadiums that are totally packed. Whether that's wise or not, I'm not a virologist, I'm not an epidemiologist, I'm not sure I can say. But what I think I can say is that there are circumstances where people in different communities in the United States, who are not totally vaccinated, should not be gathering yet.

Now, a lot of these sporting events are taking place in outdoor stadiums, maybe that's safer, I'm not sure. But what happens when you've got a sellout crowd in between innings at a Braves game? You've got people packed into a bathroom and half of them aren't vaccinated.

The optimist, I think the people who go to these games, they want to believe that it's safe and that we've turned the corner. Sporting events are really, at their core, about bringing people together, right? I mean, that's what those stadiums represent, thousands of people coming together for a shared experience.

So, I think people have been missing the ability to come together with their families, with their friends, with their fellow fans to go to a Braves game or Atlanta United game. And that matters to people, you know? We have this, I think, inherent need to connect with people. Personally, I have not enjoyed teaching online, anywhere nearly as much as I enjoy being in a classroom. I want to be with my students in person. So, I think the optimist in me would say it's good news, because one of the main reasons that this is happening is because we've seen vaccination rates growing in the United States.

Now the cynic in me says, I'm not so sure. Does it send the right message to people that they're having sold-out games at the Braves park, or at the United games?

I don't know. We know that it's safer to be outside than it is to be indoors. But at the same time, in the state of Georgia, only 41% of people who are eligible to be vaccinated are vaccinated. So, you think about these events that are televised — that's what these events are, they're TV shows — and people who don't live in Atlanta, they might watch these games on TV and think, “boy, things must be back to normal in Atlanta.” But they're not. We still have communities who have not yet been vaccinated, who are vulnerable to getting sick.

So, the cynic in me worries that in some parts of the country, maybe in Atlanta and in Georgia, that there is a rush to try to return to normality too soon. And that poses danger, danger that will have consequences for us in the months to come.

Yeah, that is a good segue into my question about the Olympics. You know, there's a ton of debate on whether or not they should happen because of Covid. What do you think, should Japan go forward with them?

JS: The first thing is that, I would say, respect the wishes of the Japanese people. Overwhelming numbers of Japanese people have said “We do not want the Olympics here.”

And the reason for that is that there's still a state of emergency in Tokyo and in other parts of Japan. Only 5% of the people in Japan throughout the entire country are fully vaccinated. [Editor's note: on the date of publication, this number has increased to about 14% of the population.] And there's been great criticism by medical officials in Japan about how the government has handled the vaccination process, it's been very slow. And it tells us that the population is incredibly vulnerable.

And now, despite the International Olympic Committee's (IOC) claims that they're going to stage these games safely, and that the athletes and officials who come to Japan from other countries are going to be tested before they leave their home country, before they enter Japan, they're going to do this, they're gonna do that — we need to listen to the people of Japan. We should respect their wishes, we should respect their boundaries. And so in some ways, you could make the case that the IOC and the government of Japan are not respecting the wishes, boundaries, and safety of the people in Japan.

For example, I read this morning that there's going to be widespread testing for people involved in staging the game. So, IOC officials, the athletes, coaches, trainers, representatives from the different countries, but that testing is not available to all the people in Japan. The government there is making a priority to protect these athletes for the Olympic Games at the expense of the people.

At the same time, there's not enough hospital beds in some communities, in Tokyo in particular. So, what happens if you have athletes and other Olympic-related personnel who get sick and they need medical attention? Should they get the beds before the people of Japan who may need those beds as well?

It raises these ethical questions about whether or not this is the right thing to do for the people of Japan. I think too often the discussion is framed around the athletes around the world, and “the Olympic Games must go on,” but what about the people there in that country, who said, “this is a threat to our health and safety, it's a public health concern?”

The driving force behind the return to the Olympic Games a year after they were supposed to take place in 2020 in Tokyo is all about television revenue. 75% of the revenue generated from the Tokyo Games comes from television broadcast rights. And the country of Japan has invested billions of dollars into these games. So what's at stake here is money. And I often tell my students, whether I'm teaching US history or sports history, “follow the money.” Money is a driving force in the decisions that are made by politicians, by the sponsors, by the people who organize sporting events. So that's a big part of the story here that can't be overlooked.

Here in the United States, we have 60-some percent of the country that's vaccinated, but it doesn't mean that the pandemic is over. And so, I guess my bottom-line message is that I worry that these sporting events communicate to people in the United States and maybe other places around the world who are watching our events, maybe watching the Olympics, who get the false impression that the pandemic is over and that we can return to the way things were before the pandemic started.

JS: I think what historians will be looking at when they look at our pandemic a hundred years from now is, “How did the organizers and the politicians make the decisions about when to come back? When did they declare that it was safe?”

And one thing I think they'll see is if they were to look at a map of the United States — a political map of the United States — they'll see that in schools, high schools, and colleges, that the decisions to return to playing college football and sporting events in those communities will follow our political map. Just like it shows right now, if you look at our vaccination map, it follows that in the states that Joe Biden won, you have a higher rate of people getting vaccinated and in the states that Donald Trump won, you have a much lower rate of vaccinations.

But my point is, I think that what historians will see is that the way that the pandemic was politicized not only had implications for vaccination rates, but also for the decision-makers to decide when it was safe to return to the playing field. I think that is a story that will interest historians years from now.

Johnny Smith studies the intersection of sports with race, politics, and culture throughout history. Contact him for media requests at john.smith@hsoc.gatech.edu or learn more in his bio.