Admit it: When you saw those twisting, turning, darting shapes captured on video by Navy fighter pilots or read the recent U.S. government report on “unidentified aerial phenomena,” your mind quickly ticked through a roster of alien arrival films. Independence Day. Pacific Rim. The Last Starfighter. War of the Worlds.

There’s a reason for that, says Lisa Yaszek, Regents Professor of Science Fiction Studies in Ivan Allen College’s School of Literature, Media, and Communication. Whether UFOs are alien or not, what we see in the skies is heavily influenced by the science fiction trends of the day.

“One of the most fascinating parts of the Pentagon report is this exploration of video footage of these unidentified flying objects,” said Yaszek. “They look really quite familiar to us because they look like the way we see spaceships move in science fiction. And I think it’s no surprise that you can see the similarities because there’s a long history of UFO reports that seem to really sound a lot like the kinds of spaceships that people are reading about in stories and watching on the silver screen.” 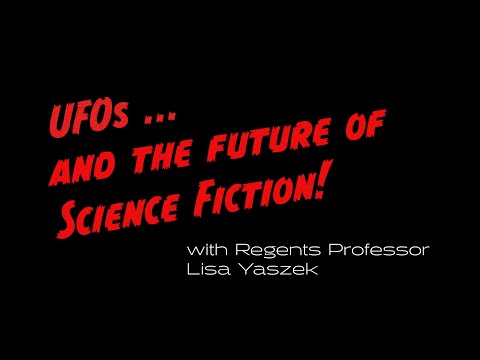 It’s an association with its modern origins in the 1800s and a spate of UFO sightings bearing uncanny resemblances to the airships in Jules Verne stories popular at the time.

For instance, in 1897, an Aurora, Texas, newspaper carried a report of a sputtering airship piloted by a mysterious figure bearing papers written in an unknown script. The craft crashed into a windmill owned by a local official, spewing debris for acres — and ruining the official’s flower garden.

A U.S. Army Signals Service officer stationed nearby concluded the badly disfigured remains likely were of a Martian, the newspaper reported.

In later years, cigar-shaped craft reminiscent of those in the Flash Gordon serials began to take hold, followed by the classic flying saucers of the post-World War II years, inspired by years of such craft on the covers of popular science fiction magazines. And what did we begin to see in the late 70s, after Star Wars stormed the popular imagination? “UFOs populated with little helper robots that looked an awful like R2D2,” Yaszek said.

The Role of Science and Politics in Science Fiction

Although science fiction bears much of the responsibility for shaping our imagination when it comes to aliens and UFOs, science and even politics also contribute, Yaszek said.

“A lot of early stories are very interested in Darwinian ideas of competition between apex or predator species,” Yaszek said. “And so they always imagine that humans and aliens will automatically go to war over scarce resources, which usually meant water and women.”

By the end of World War II, an enormous global undertaking that required unprecedented international collaboration, themes began to turn to cooperation.

“The Day the Earth Stood Still is a marvelous example of that. It’s a warning about what happens when you shoot first and ask questions later,” Yaszek said (spoiler alert: you get blackballed from the Intergalactic Clubhouse).

Science fiction also had its share of stories influenced by post-war frenzy over communist influence in the U.S. government, of course (see Invasion of the Body Snatchers).

And in more recent years, the civil rights, feminist, and LGBTQIA+ movements have also shaped our perception of aliens, Yaszek said. In 1969, Star Trek tackled racism with the episode "Let That Be Your Last Battlefield." More recently, the movie Arrival featured tension between male military leaders who favored war and a female linguist who favors communication, allowing us, Yaszek says, to explore "conventionally masculine and feminine responses with the alien other."

And let's not forget David Bowie and Janelle Monae, who presented themselves as aliens, using science fiction iconography to explore their queer and, in Monae's case, black and female identities.

“We love these stories because aliens are mirrors to ourselves. And when we tell stories about aliens and the vehicles that they travel in, just like we travel in vehicles, it allows us to explore not just what we might do if we met truly different beings from other worlds, but also how to conduct ourselves as we meet alien others every day, in our own lives within our own families, within our own nations, and within our own world,” Yaszek said.

The Fate of Sci-Fi in a Post-Contact World

Yaszek doesn’t know for sure what UFOs are, although if pressed, she will tell you she doesn’t think the objects recorded by Navy pilots are ETs.

“I don't think we're going to meet sentient aliens anytime in the near future,” she said.

But she doubts that even if we do, first contact will leave science fiction writers dumbfounded, with nothing new or interesting to say.

“A lot of people might think that if we were so fortunate as to encounter aliens in our own lifetime, that that would be the end of science fiction stories about UFOs and aliens. But really, if you look at science fiction, it's really the history of rolling with scientific change and technological development,” Yaszek said.

First contact, she argues, will just be more fodder for authors.

In the meantime, the stories they create will help prepare us for that day when we might really encounter beings from another world, she says. It’s just another example of the value of studying science fiction at a place like Georiga Tech.

“Science fiction is a virtual laboratory where we can test out ideas in scenarios before we act them out in reality. Science fiction has already given us so many different scenarios for understanding aliens and possible alien interactions. We could only benefit by looking at these stories and using them as a kind of training ground for thinking about how we might really, truly deal with the unknown.”

So while it’s unlikely that the sober bureaucrats who wrote the UFO report were trying to give us a reason to keep looking up, maybe it’s better they didn’t answer all the questions we have — at least not publicly.

“I think it's really important to note that since the advent of cell phones, the number of UFO and alien sightings have gone down drastically,” Yaszek said. “I suspect that's because we don't want to lose the ability to tell these kinds of stories. We don't want anything that might just prove them and prevent us from dreaming.”