CIA Director William J. Burns visited Georgia Tech on April 14 to deliver his first public speech since taking over the agency a year ago. He addressed international challenges facing the United States and the pressing need for a diverse intelligence workforce.

Burns highlighted four challenges he believes will shape America’s future: the Russian aggression in Ukraine, a growing China, the impact of the rapid growth of technology, and the need to develop a diverse workforce.

“We still have a long way to go to strengthen the diverse and inclusive cadre of career officers that are so important to an agency with global reach and global responsibilities.” Burns said. “We cannot compete successfully on that landscape if everyone looks like me, talks like me, and thinks like me.”

The Sam Nunn School of International Affairs (Nunn School) hosted the event, held at the Ferst Center for the Arts.

Daniel Aum, Ph.D. student in the Nunn School agrees. “Director Burns choosing to give his first public speech at Georgia Tech reflects the CIA’s understanding of the need to pair human ingenuity with technical capabilities to address societal issues,” he said.

Burns previously served as the U.S. ambassador to Russia. He quipped that “much of his grey hair” came from dealing with Russian President Vladimir Putin.

On Ukraine, Burns praised President Joe Biden’s decision to share information and intelligence with U.S. allies since they first got word that Putin might invade Ukraine. This, he said, is a crucial step in finding new ways to utilize intelligence.

“By being open with some of our secrets, we made it harder for Putin to obscure the truth of his unprovoked and vicious aggression,” Burns said.

Burns called China a distinct challenge, “in many ways the most profound test that the CIA has ever faced.” He noted China’s meteoric rise during the 21st century has had some upsides, economically benefitting many Chinese and American people. But he said Chinese economic and military expansion still poses an incredible threat to the United States.

To combat these challenges, Burns said the CIA has established its only mission center dedicated solely to one country. Burns said that the agency also is working to increase the size of its workforce dealing with China, including Mandarin speakers.

Finally, Burns highlighted the need for a diverse intelligence community. He also offered a “shameless recruiting pitch” to the students in the audience.

“Intelligence is fundamentally a human endeavor, and I’m reminded every day that my greatest good fortune in this job are the people with whom I serve,” he said.

Jenna Jordan, associate professor, director of graduate programs, and interim associate chair in the Nunn School, then joined Burns on stage for a moderated question-and-answer with audience members.

One question focused on what the CIA would be looking for in a potential applicant. Burns responded that, while there is no template for the ideal CIA applicant, the agency is always on the lookout for people with strong foreign language and STEM skills.

Another question asked about the challenges and opportunities the intelligence community faces due to climate change. Burns reiterated the magnitude of the threat posed by climate change and noted that the CIA works to inform policymakers about how much it will impact all aspects of society. He added that the agency also compares how world leaders approach the issue to help American policymakers get a better grasp on potential solutions.

The final question came from former U.S. Sen. Sam Nunn, for whom the Nunn School is named. The former chair of the Armed Services Committee asked about the CIA’s risk assessment process when it came to the Russian invasion of Ukraine, particularly relating to nuclear weapons.

“President Biden has a tremendous responsibility to both help Ukraine, but also to avoid World War III. Would you like to comment on that kind of risk assessment and what the agency is thinking?” Nunn asked.

“None of us can take lightly the threat posed by a potential resort to tactical nuclear weapons or low-yield nuclear weapons,” Burns replied. He went on to add that, while the CIA has yet to see any “practical evidence” of this happening anytime soon, the agency remains aware of the threat.

Burns later had lunch and spoke with faculty from the Nunn School and other members of the Georgia Tech community, including international affairs students. 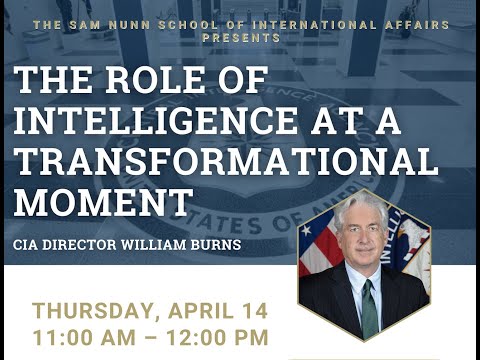