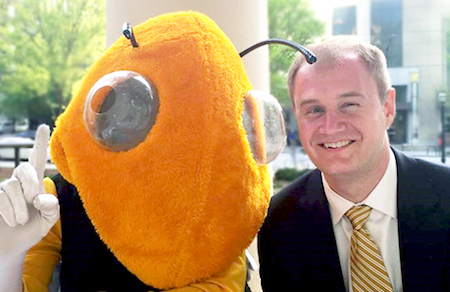 Almost immediately after graduation I left for Berlin, Germany for a ten-week internship with the Political Section of the U.S. Embassy. I returned in the fall to start my master’s degree in German and European Studies at Georgetown University in Washington, D.C. As you might imagine based on the title, a lot of my classes revolved around modern European history, politics, culture and economics

I ventured outside of Europe for my electives with a concentration in Security Studies. Ultimately, I put the two together for my master’s project, which examined the British defense and economic cooperation with the European Union. While at Georgetown, I interned for the Center for European Policy Analysis as a research assistant, focusing mainly on Central and Eastern European security and energy policy.

As an Operations Analyst at TechOp Solutions International, I am part of the Department of Homeland Security’s Open Source Monitoring Capability. Broadly speaking, I am responsible for keeping an eye on reporting from a variety of open sources for items that might involve matters of homeland security. I focus on traditional broadcast and print media sources, and I also supervise an analyst who tracks social media. Together, we take the items of interest we find and publish reports summarizing the key points to provide situational awareness for senior leadership.

My projects change every hour; the variety of projects that I am a part of is the most interesting part of my job. For example, I might be piecing together the latest information about a massive wildfire in California while editing my partner’s report about a suicide bombing in Iraq. An hour later, I’m reporting a new critical vulnerability discovered in a common piece of software and proofreading a report about a hazardous materials spill in Oklahoma. Along the way, I hope I am preventing a bad situation from getting worse, or that I am providing the information to get help where it’s needed most.

Briefing the Director of the CIA

While I was working at the embassy in Berlin, General Petraeus, who was between his appointments as the Commander of the International Security Assistance Force (ISAF) in Afghanistan and Director of the CIA, came in for a briefing on Germany's role in ISAF. I got to write the backbone of a big portion of the briefing. I'd never met anyone famous before, so I was really excited about attending the meeting. I was all set to go, but at the last minute my supervisor told me that the other topics to be discussed were too sensitive for me to hear. Unfortunately, I didn't get to attend the meeting where I'd written a big piece of the briefing!

Liberal Arts with a Technical Twist

I believe my education at the Ivan Allen College made me better-rounded than other graduates of liberal arts schools. Some of that was intentionally built into the curriculum: I had a full year each of math, lab science and computer science that others typically don’t. Some of it is also unintentional: I spent most of my four years around soon-to-be scientists and engineers, and in order to have a happy social life, I needed to learn how to relate to them and understand how they think.

Having that technical background was also useful in learning different ways to approach a problem. I’ve learned to approach some problems like equations: what are the knowns and unknowns, and how do they combine in order to create a solution? At the same time, learning basic coding has guided my approach to planning. I know what the end result needs to be, but what are the individual steps that need to happen, and in what order should they be done to get to that result? What are the possible contingencies that might happen along the way: if “X’ happens then I should do “Y’, otherwise I will do “Z.”

“My education in the Ivan Allen College made me better-rounded than other graduates of liberal arts schools. Having that technical background [is] useful in learning different ways to approach a problem.”

Don’t beat yourself up when you fail. This is something I constantly remind myself about. You are inevitably going to experience setbacks, whether it’s bombing an exam, getting turned down for a job or an internship you really wanted, or making a mistake at work. At the same time, don’t treat failure as something final. Just because you failed once doesn’t mean you won’t succeed later.