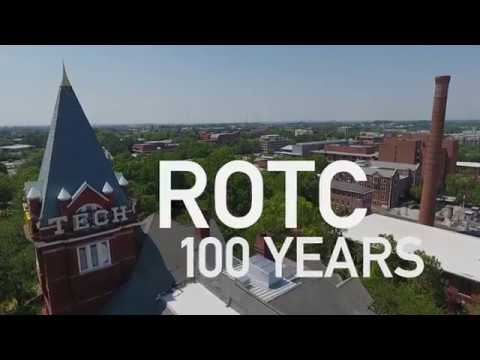 From their roots in a student-run Signal Corps, Georgia Tech’s Reserve Officers’ Training Corps programs have trained thousands of leaders.

More than a century ago, Georgia Tech students watched with what must have been foreboding as World War I swept across Europe.

They decided to form a student-run Signal Corps, to begin wearing uniforms, and to do what they could to help defend the United States should war come calling.

From that beginning, a rich tradition of military service was born. This year, the Institute celebrates 100 years of Reserve Officers’ Training Corps (ROTC).

In the years since 1917, graduates of the Institute’s Army, Navy, and Air Force ROTC programs have gone on to distinguished careers as admirals, generals, Medal of Honor recipients, astronauts, and industry leaders. Many have gone to war. Not all have come back.

Like those who came before them, many of today’s ROTC students are among the most accomplished on campus.

“Tech doesn’t accept mediocrity in their students. It is famous for that,” said Colonel John Meister, professor of military science and commander of the Army ROTC unit. “That reinforcement of achievement that they learn here at Georgia Tech translates very well to being an Army officer.”

More than 90 percent of Naval ROTC students maintain GPAs north of 3.5 even while taking on extra coursework required by the military science program, according to Captain Baron Reinhold, professor of military science at Georgia Tech and commander of the Naval ROTC program.

“I have no idea when they sleep, when they eat,” Reinhold said.

On the first day of October in 1918, Georgia Governor Hugh Dorsey and Atlanta Mayor Asa Candler made their way to the Georgia Tech campus for a grand occasion, the induction of the entire student body into the Student Army Training Corps. The Corps was a military training unit that briefly existed along with ROTC on university campuses across the country during World War I.

“The Georgia School of Technology will officially place its personnel and all its resources at the government’s disposal this morning at 11 o’clock,” The Atlanta Constitution reported that day. “The entire command will be assembled on Grant Field at the same hour that over 150,000 college students, in more than 500 colleges and universities throughout the country, are being formally inducted into the nation’s service.”

The entire student body was to march in review. The newspaper said young women chosen as “regimental sponsors” would present the corps with a large flag, which would fly above the field to the strains of the Star-Spangled Banner.

The ceremony was the culmination of efforts dating back to 1915 to secure more professional military training at Georgia Tech amid growing concerns about America’s entry in the year-old European war.

By 1915, Tech boasted a student-run Signal Corps organized, according to that year’s course catalog, to “acquire portable equipment so that in times of local or national emergency it would be prepared to take the field and get in communication from any point.”

After the United States entered the war, students took it upon themselves to dress in makeshift military uniforms and conduct drills on campus.

“Some men run around with a military hat on with their citizen clothes,” the Technique, the Institute’s student newspaper, griped on November 13, 1917. “Others wear khaki trousers, leggings, and a pair of army shoes with a red tie, vest, and gray coat — in fact almost any and every kind of combination is to be seen.”

Still, the students’ passion and patriotism were evident. They urged one another to wear the uniform with the pride expected of a Tech student. Those in the woodshop made a replica cannon used for training soldiers at Fort Gordon.

“We must face our opportunity and our duty! We must be MEN! Let us so conserve our energies; build up our minds and bodies, and strengthen our character and lives that we may be ready to perform our tasks nobly when the call shall come,” the Technique’s editors exhorted.

They kept drilling, and their efforts eventually paid off.

“The faculty, seeing that the men were in earnest, took steps to obtain a military instructor from the army and assigned a regular drill hour,” the Technique later reported.

That instructor, a retired Army officer recalled by the government to whip the Tech men into officer material, arrived in December 1917. By spring, Lieutenant Colonel Elmer Hubbard’s leadership of the newly formed Department of Military Science was paying dividends.

“Under his very efficient and thorough instruction the corps has emerged from a state of chaos into a well-organized and well-drilled regiment,” the newspaper wrote.

By then, an eight-week ground school for pilots had been operating at Tech for six months. The War Department shut that school down in January and replaced it with a supply school, which would, in turn, close in the spring of 1918 amid the nation’s ever-changing war needs.

Finally, on March 30, 1918, formal orders from the War Department established ROTC at Tech. The faculty voted to make participation mandatory for freshmen and sophomores. That is the way it would stay until 1965. 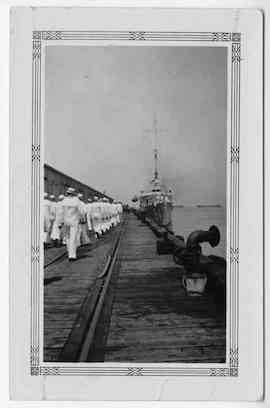 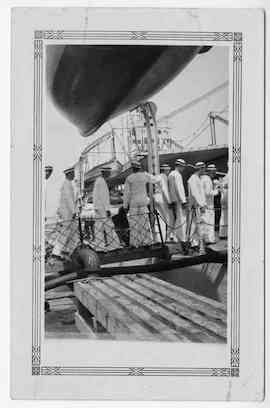 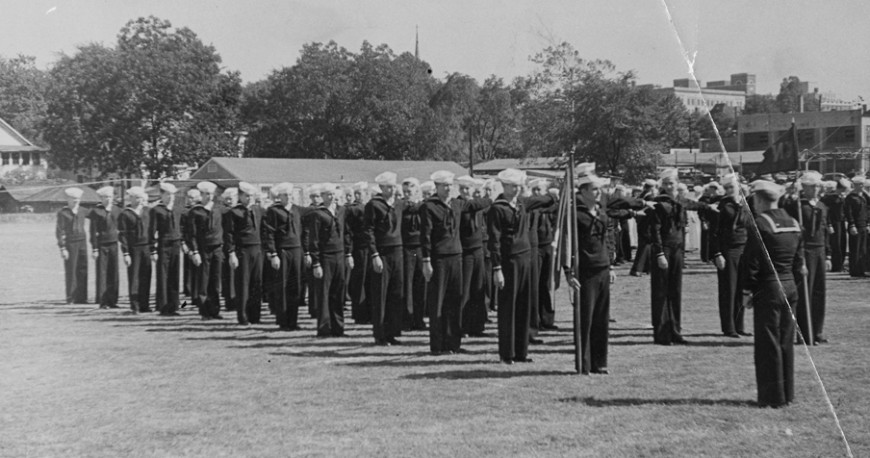 World War II: “An Industry Keyed to Its Highest Pitch of Wartime Production”

The nearly quarter-century between the world wars saw ROTC flourish.

In 1926, the Navy picked Tech as one of only six universities, and the only one in the South, as a site for its new ROTC program.

The unit started with 60 freshmen, and training focused on navigation, gunnery, and seamanship, which cadets learned in part by sailing three 24-foot whaleboats around Piedmont Lake, according to a unit history.

A few years later, British Prime Minister Winston Churchill visited Atlanta and reviewed Tech’s ROTC units at Grant Field. He declared them, the Technique reported, “The best drilled reserve corps I have ever seen in America.”

He also predicted that few of the cadets would ever see war in their lifetimes. But violence broke out again in just a matter of years and great changes once more swept the Georgia Tech campus.

In addition to ROTC, Tech hosted other military training programs during World War II. These included specialized programs meant to channel technically trained men to the military while also keeping college enrollment up during the war.

These efforts brought thousands of military members to Tech during the war. Temporary barracks sprang up around campus. The school converted Brittain Dining Hall to a military mess hall that served 2,000 men in two hours, a commander noted at the time.

Tech became something of a military camp, and life on campus reflected it.

“Every morning we had to get up very early, I don’t remember — 5:30, 6 o’clock, and we would form up in ranks out on Techwood Drive, right in front of the stadium, and we jogged up to North Avenue and around to where the expressway is now. There was an athletic field there where we did our sitting up exercises,” recalled Georgia Tech alumnus Clayton Griffith (EE 1945) in a 1995 oral history interview.

Tech had become, the Technique said in 1943, “an industry keyed to its highest pitch of wartime production.” 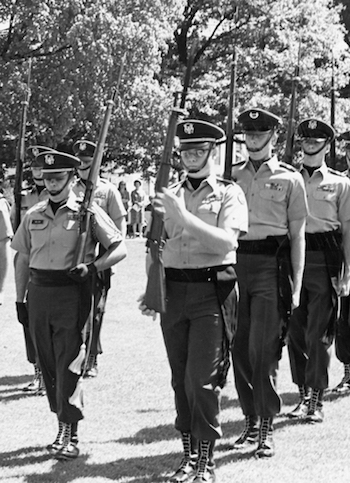 By the time World War II ended, military training programs at Tech had graduated thousands of officers and technical experts to the war effort.

After the war, the Air Force established its own ROTC program at Georgia Tech. In addition to producing officers for the brand new U.S. Air Force, it was the first at Tech to accept women. That 1955 milestone came three years after the Board of Regents voted to allow women to attend Georgia Tech.

The 1960s brought more changes. Anti-ROTC protests roiled college campuses as anger over the Vietnam War began to grow, but Tech was an exception.

“Everybody was too busy trying to survive Tech,” recalled Navy ROTC alumnus Fred Espy, who graduated in 1966.

Still, the mandatory enrollment in ROTC was dropped in 1965. A tradition of nearly 50 years ended, seemingly without fanfare.

“There seemed to be little student reaction one way or another,” the Georgia Tech Alumni Magazine noted that year.

Today, there are fewer ROTC students at Tech — around 300 among more than 29,000 — yet, they are not hard to find around campus.

They make their way between classes on Tuesdays and Thursdays dressed in green or gray combat uniforms, or tan Navy officer outfits, blue Air Force uniforms, or Army greens.

They do physical training before the sun rises, or practice marching skills. Much of that work is led by cadet officers — an opportunity for them to practice leadership skills. Cadet corps leaders can spend as many as 20 hours a week on their ROTC duties, said Lieutenant Jake Bush, an assistant professor of naval science.

They also take courses ranging from the basics of military history, traditions, and courtesies to intensive courses focusing on topics such as naval navigation, military operations, and tactics, and freewheeling discussions of leadership and battlefield ethics.

In the summer, cadets disperse to other training programs across the country. For some, that means learning military tactics firsthand or how to run a platoon. For others, it involves shadowing an enlisted sailor or an officer to learn about life on active duty.

Reinhold, a graduate of the U.S. Naval Academy, is more impressed with his cadets at Georgia Tech than he was with his fellow students at the Naval Academy, one of the most selective schools in the country. There, midshipmen lead a highly regimented life that dictates when they rise, how much time they have to eat, when they will go to class, and when they will study.

“Here, you’ve got a million distractions,” Reinhold said. “You’ve got to be more organized.”

You don’t need to tell that to Sam Sasser, a senior in International Affairs who is preparing to get his commission as a second lieutenant in the Marine Corps. He credits Tech’s famously strenuous academics with helping forge him and his fellow cadets into strong leaders.

“We have a fantastic faculty and staff,” he said of Georgia Tech. “We have a level of rigor that requires you to know how to manage your time and get by without a lot of sleep.”

Still, no matter how difficult their years at Tech, the reality is that many ROTC commissioned officers face even more difficult tests in their years ahead. While most of their friends in civilian life will head off to new jobs, many newly commissioned ROTC officers may well be on their way to war.

“Now we are on the precipice of so many bad things, in a large way, going south, and we have an ongoing war on terror, if you will,” said Reinhold, the Naval ROTC commander. “So, they are going to see combat. And they might see colossal combat that we haven’t seen in a long time.”

Newly commissioned officers also will have to deal with constantly changing technologies on the battlefield, and social and political issues at home, said Colonel Juan Silva, the Air Force ROTC commander.

Despite those challenges, Silva said there is a simple reason why these young men and women do what they do: They love their country and are driven to serve.

“There is a large commitment for the professional track that these young men and women are embarking on. It takes a lot of dedication to do so,” he said. “These are special people.”